An introduction to Sikhism

Sikhism - a Modern Religion
Sikhism, the youngest among world religions, arose over 500 years ago in (sub-continental) India. It surged up across the horizon as a great revolutionary force that changed the very course of Indian history. With its values of universalism, liberalism, humanism and pluralism, preached and propagated in the medieval age, Sikh religion introduced new elements which later flowered out in modern world civilization. Sikhism endeavoured for a new dispensation characterized by the values of liberty, equality, justice, tolerance and non-violence, discarding discriminations of all kinds on grounds of creed, caste, class, race, region, sex, etc. God is realizable by man in his very earthly, household life, through spiritual enlightenment, moral responsibility, intellectual catholicity and social commitment. There are over 23 million Sikhs in the world with the majority resident in Punjab, India. Sikhism, a unique ´revealed´ religion originated with Guru Nanak (1469-1539 AD) who was succeeded by nine other Guru's,Guru Gobind Singh (1666-1708 AD) being the last and tenth Guru. It is a distinctive monotheistic faith envisioning one Supreme God who is Creator also.

A Sikh (the word means 'disciple') is a person who follows the teachings of the ten Sikh Gurus and the Guru Granth Sahib (the eternal Guru in the form of holy scriptures). The Sikh Gurus were prophets whom Sikhs believe were sent by God to deliver his message and to lead people on the true path to God. Sikhs treat the Gurus with the same respect as they would treat the one almighty God. The Punjab is the centre of Sikh culture and tradition, and most gurdwaras (Sikh places of worship) linked with the lives of the Gurus or famous Sikhs are to be found in the Punjab.

The Sikh religion was founded by Guru Nanak in the 15th century. He taught that everyone is equal before God and that the main purpose of human life is to devote oneself to the worship and service of the one almighty God. Guru Nanak knew that to remove people from ritualism, idol worship, and the caste system would take generations of divine teaching. For this reason, he was succeeded by nine other Gurus. The tenth Guru, Guru Gobind Singh named the Adi Granth (the Sikh holy scriptures) as the final Guru. These Scriptures then became known as the Guru Granth Sahib. Sikhs firmly believe that the divine personality of Guru Nanak flowed through all eleven Gurus. For a short description of Sikh words and symbols, have a look at the Sikh Glossary.

Guru Nanak was born in 1469CE at Talwandi in the Punjab. Talwandi was later renamed Nankana Sahib in his honour and is now in Pakistan. Guru Nanak's father, Mehta Kalu, wanted to bring him up as an orthodox Hindu, but Guru Nanak rejected the rituals and customs associated with Hinduism and other religions from the very start. Instead he showed people the essence of true devotion to God.

He taught that human life is a very precious opportunity to meet the creator, God, through absolute love and devotion to him.

He taught that the sins of lust, anger, greed, attachment to worldly things, and arrogance or pride take us away from God. Guru Nanak always taught by example and through his own humility, love and devotion to God he taught how human beings should live.

Guru Nanak spread a simple message of "Ek Onkar": we are all one, created by the One Creator of all Creation. This was at a time when India was being torn apart by castes, sectarianism, religious factions, and fanaticism. He aligned with no religion, and respected all religions. He expressed the reality that there is one God and many paths, and the Name of God is Truth, "Sat Nam". Guru Nanak's followers were Sikhs (seekers of truth). He taught them to bow only before God, and to link themselves to the Guru, the Light of Truth, who lives always in direct consciousness of God, experiencing no separation. Through words and example, the Guru demonstrates to followers how to experience God within themselves, bringing them from darkness into light. Guru Nanak was a humble bearer of this Light of Truth. He opposed superstition, injustice, and hypocrisy and inspired seekers by singing divine songs which touched the hearts of the most callous listeners. These songs were recorded, and formed the beginnings of the Sikhs' sacred writings, later to become the "Siri Guru Granth Sahib".

Guru Nanak taught his way of life:
Nam Japa - To get up each day before sunrise, to clean the body, meditate on God's Name and recite the Guru's hymns to clean the mind. Throughout the day, continuously remember God's Name with every breath.
Dharam di Kirat Karni - To work and earn by the sweat of the brow, to live a family way of life, and practice truthfulness and honesty in all dealings.
Vand Ke Chakna - To share the fruits of one's labor with others before considering oneself. Thus, to live as an inspiration and a support to the entire community.

The Golden Chain
The foundation of Sikhism was laid down by Guru Nanak. Guru Nanak infused his own consciousness into a disciple, who then became Guru, subsequently passing the light on to the next, and so on. The word "Guru" is derived from the root words "Gu", which means darkness or ignorance, and "Ru", which means light or knowledge The Guru is the experience of Truth (God).

Each one of the Ten Gurus represents a divine attribute:

The Sikh Scripture, Guru Granth (earlier known as Adi Granth), is unique among the Scriptures of different religions. The Adi Granth was prepared by the fifth Guru himself who compiled holy compositions of the earlier Gurus as well as of like-spirited Hindu Saints and Muslim Sufis. Later Guru Gobind Singh added to the Adi Granth the hymns of the ninth Prophet. Before passing away, Guru Gobind Singh bestowed ´Guruship´ on the Adi Granth, making it the Guru Granth, that is, the embodiment of the spirit of the Gurus. The Guru Granth thus is revered and worshipped as the eternal "living" Guru by the Sikhs. The Sikh Scripture contains 5894 holy hymns in 31 ragas (classical musical measures) of the Sikh Gurus, Hindu Saints and Muslim divines-36 in all-from the length and breadth of (sub-continental) India, embodying the spiritual enlightenment and religious consciousness, from the thirteenth to the seventeenth century.

Guru Gobind Singh, the Tenth Guru, exemplified the Sikh ideal of the Soldier-Saint. He was also an inspired and prolific writer, courageous warrior, and a source of Divine Wisdom to his Sikhs. "When all other means have failed," he said, "only then is it righteous to take up the sword." He was the defender of the poor, the meek, and the oppressed masses of India.
In 1699, at Sri Anandpur Sahib, Guru Gobind Singh created the order of the Khalsa through the sacrament of baptismal ´amrit´. The Guru thereby institutionalized the universal, humanistic teachings of Guru Nanak who in the medieval age had envisioned a new civilization characterised by a new value pattern based on the primacy of the human spirit.

Here was a unique message : the humanity of God and the divinity of man - a concept from which emanate, in a sense, the ideals enshrined in the Preamble to the United Nations Charter, which reaffirms "faith in fundamental human rights, in the dignity and worth of the human person in the equal rights of men and women and of nations large and small."

The Khalsa is a spiritual brotherhood and sisterhood devoted to purity of thought and action. Guru Gobind Singh gave the Khalsa a distinctive external form to remind them of their commitment, and to help them maintain an elevated state of consciousness. Every Sikh baptized as Khalsa vows to wear the Five "K's":

Kesh - uncut hair and beard, as given by God, to sustain him or her in higher consciousness; and a turban, the crown of spirituality.

Kangha - a wooden comb to properly groom the hair as a symbol of cleanliness.

Katchera - specially made cotton underwear as a reminder of the commitment to purity.

Kara - a steel circle, worn on the wrist, signifying bondage to Truth and freedom from every other entanglement.

Kirpan - the sword, with which the Khalsa is committed to righteously defend the fine line of the Truth.

'Takht' which literally means a throne or seat of authority is a result of historical growth of Sikhism. There are five Takhats. Two of the five Takhts are located outside Punjab and are Takht Sri Patna Sahib, Patna in Bihar, and Takht Sri Hazoor Sahib at Nanded in Maharashtra. The other three Takhts are in Punjab - Akal Takht in Amritsar, Sri Keshgarh Sahib in Anandpur and Sri Damdama Sahib at Talwandi Sabo Bhatinda district.

Enjoy the eternal bliss by listening to Amritsar Paath 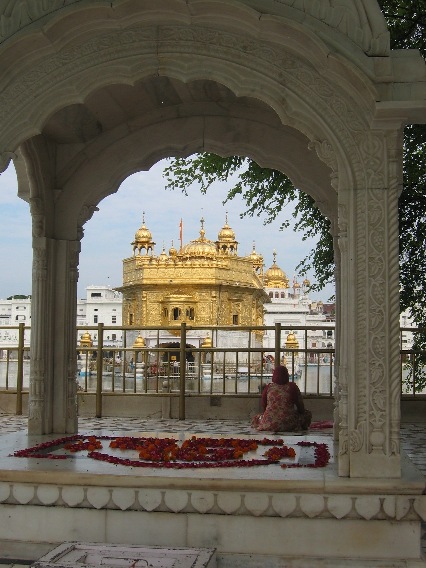