The spiritual center for the Sikhs, home to the Golden Temple and the gateway to Punjab.

Amritsar, home to the Golden Temple is one of the most ancient and fascinating cities of India. It is an important seat of Sikh history and culture. Being the gateway for travellers coming to India on the overland route from central Asia it soon became the centre of various commercial activities. There are various historical and religious sites - see Amritsar City Map. The most famous of them all in the Golden Temple which was founded by the fourth Guru of Sikhs, Guru Ramdas and completed by his successor Guru Arjan Dev.

Amritsar Massacre: This place noted for its most notorious massacre under British rule. It is 400 meters north of the Golden Temple. The British General Dyer was the Lieutenant Governor of the province in 1919. He banned all meetings and demonstrations led by Indians against the economical set back by World War I. On 13 April 1919, pilgrims poured into Amritsar to celebrate the Baisakhi festival, a holiday in the Sikh calendar. In the afternoon thousands of people gathered at Jallian Wala Bagh to celebrate the Baisakhi. This ground surrounded by high walls on all sides has only a narrow alley for access. General Dyer personally led the troops to the sight and ordered his men to open fire without any warning. It resulted in the death of 379 and injured more than 1200. India was outraged by Dyerīs massacre. Gandhiji, called for a nation wide strike and started the Non-cooperation Movement, which became an important mile stone in the struggle for Indiaīs Independence. Today this ground has been changed to a park and it has a pleasant garden. There is a narrow path between the houses which leads to the lawn of the park. At the entrance there is a memorial plaque which recounts the history. There is a well on the north side in which many people who tried to escape from the bullets were drowned, and remnants of walls have been preserved to show the bullet holes. At the east end of the garden there is a large memorial built in memory of those who died here.

This beautiful garden is named as a tribute to Guru Ram Das, the founder of the city. It is situated in the new part of town and has a museum in the summer palace built by the Sikh Maharaja Ranjit Singh (1780-1839) the Lion of Punjab. The museum contains weapons dating back to Mughal times and some portraits of the ruling houses of the Punjab and a replica of the diamond īKohinoorī. To commemorate the memory of his valour Ram Bagh has a lively statue of Maharaja Ranjit Singh saddled on a horse. It is closed on Wednesdays.

Summer place of Maharaja Ranjit Singh : Is situated in the middle of a beautiful garden called Ram bagh. This garden is laid out on the pattern of Shalimar Bagh at Lahore. Only its architecturally unique īdarshani deorhiī has remained intact. A museum after the name of the Maharaja is set up here displaying oil paintings, miniatures, coins, abd weapons relating to the Sikh period.

Mosque at Fatehabad : Situated at a distance of 40 kms, the walls of this mosque are decorated with beautiful floral motifs.

Khalsa College & Guru Nanak Dev University : Khalsa College was founded in 1892 and built on grand scale in typical Sikh architecture, its distinguished alumni; sportsmen, servicemen, administrators, professionals, fill up Indiaīs compilations of Whoīs Who. On a part of its land a new University called Guru Nanak Dev University was established. Soon it has become distinguished for starting modern curricula and has etched its name on the sports map of India.

Tarn Taran : 24 kilometres south, is Tarn-Taran-a town founded by Sri Guru Arjan Dev in 1590. The Gurdwara got constructed by the Guru stands on the side of a large tank. Fairs are held here on every īAmavasī dark night of the month, birth anniversaries of the Gurus, Baisakhi and Diwali.

Goindwal : A few kilometers away from Tarn Taran is the town of Goindwal, where Guru Amar Das established a new centre for preaching Sikhism. A īBaoliī, well paved with 84 steps was constructed here. The devout believe that by reciting Japji Sahib, the divine īWordī revealed to Guru Nanak Dev Ji at each step after taking a bath in the Baoli provides īMokshī, liberation from 84,000 cycles of life of this world.

Khadur Sahib : Khadur Sahib is 32 kms. south-east of the city and close to Goindwal. During the life of the second Sikh Prophet, Guru Angad Dev, it was the centre of Sikhism.

A big fair now recognised nationally and lasting for four days is held here since times immemorial on every Kartika Puran-mashi (full moon night in November).

Harike Wetland : The lake formed at the point of confluence of rivers Beas and Sutlej at Harika ford, situated mid way between Amritsar and Ferozepur was declared a national wildlife sanctuary in 1982. It is a welcome winter home to about 350 odd species of birds from far flung lands of China, Siberia, Afghanistan and Pakistan.

Baba Bakala : Situated about 45 kilometers east on the Batala road. Sri Guru Tegh Bahadurji, revealed himself to Makhan Shah Labana, a Sikh devotee here. It has a magnificent Gurdwara where people gather in thousands on every amavas (moonless night) and an annual fair is held on Raksha Bandhan day (night of full moon in August) when about one hundred thousand people visit the place. 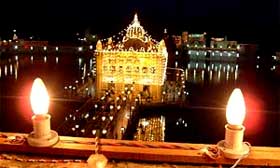 Durgiana Temple : Situated outside the Lohgarh Gate it is built after the design of the Golden Temple and attracts sages and scholars in Hindu scriptures from all over India.

Wagha Border : The international border between India and Pakistan. The pomp and pageantry of the Beating Retreat and the Change of Guard within handshaking distance of the Indian and Pakistani forces makes for a most charming spectacle.

There are a number of cotton, woollen and art silk textile factories besides other industries dealing with electric goods, sewing machines, auto parts, carpets. The milk processing plant at Verka about 6 kms from the center is the second biggest project of its kind in the country. Amritsar is Indiaīs leading exporter of goods to the Middle-East, leading distribution centre of dry fruits, tea and condiments. It is also a shopperīs paradise and a gourmetīs delight. Amritsar is the worldīs leading centre of Punjabi publications.

Amritsar Airport is now an international airport and fast becoming the gateway to Northern India. Amritsar is now the Gateway to Punjab and North India with Raja Sansi International Airport. Jet Airways, Turkmenistan, Uzbekistan and Air India now offer Amritsar Flights from Delhi, Birmingham and London. Please visit Amritsar Travel for prices for Flights to Amritsar. For Hotels in Amritsar, use Amritsar Pages.

Read and Join the Amritsar Discussion